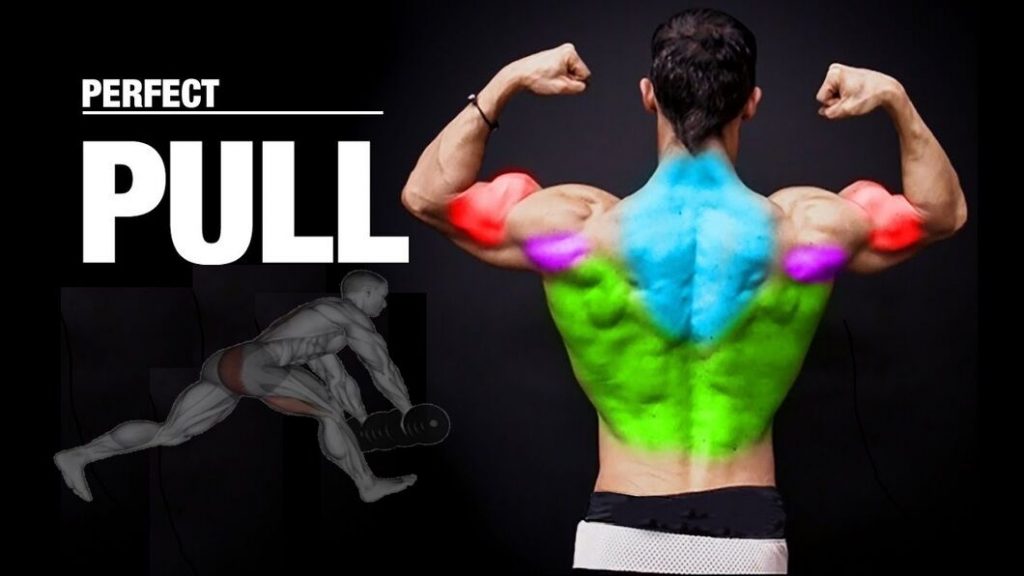 Do you know what are the major muscles that help pull, push, or swing? If not sure, this article is the right place to start. Here we’ll examine all the major muscles involved in pulling movements. Maybe you’re already asking yourself why this is relevant to know. Well, here’s why! The mission of the pull, push, swing concept is to ensure that you engage all of your muscles, not just the ones that look good in a mirror, during your workouts. Furthermore, for a successful strength training you need to incorporate an equal number of pulling and pushing movements to obtain and keep muscular balance.

We can divide all major muscles in our body in a simple and very understandable way according to the function they perform:

Your lats – the largest muscles of your back – are a set of fan-shaped muscles that start low on your spine, spread across the width of your back, and taper off at your upper arm bones (where they meet your shoulders).

HOW THEY WORK: Their primary role is to pull your arms from a raised position back down to your sides. Also, whenever you extend your arms in front of your torso, your lats are responsible for pulling your arms down toward your torso. Straight arm lat pull-down exercise is an perfect example for this muscle action. This is, as you can see, another important muscle that produces pulling motions.

However, they also help stabilize your torso during other exercises (particularly moves that target your arms, such as Biceps Curls), and they help to rotate your upper arm internally, which plays a big part in giving you that extra snap of power whenever you punch or throw. Each of these jobs gets a little help from the teres major – a smaller muscle that runs from the outer edge of the scapula to the humerus.

You will find biceps brachii in the front of your upper arm. It’s made up of two separate heads that each attach at your shoulder socket and insert onto your radius – one of the two bones of your forearm. Wedged between your biceps and upper arm bone is the brachialis, a thin muscle that attaches to your ulna – the other bone of your forearm.

The real estate between your elbows and your hands – otherwise known as your forearms – contains two sets of muscles: your wrist extensors and your wrist flexors. If you want your arms to look bigger, pay attention to your forearms.

Your hamstrings are made up of three separate muscles comprising the entire back of your thigh – the biceps femoris (found on the outer rear portion of your thigh) and the semitendinosus and semimembranosus (the two muscles that make up the bulk of your inner rear thigh). Each attaches at your pelvic bone, runs down the back of your thigh, then connects to either your shinbone or the head of your fibula.

HOW THEY WORK: Individually, these three muscles help turn your knees inward and turn your feet outward. But when united, they collectively flex (or bend) your knees and extend your hips (kick your legs back behind you). However, they don’t work alone. Other muscles, including your hip flexors, glutes, and erector spinae muscles, help out as well.

Putting it together: The muscles that help pull

In any pulling exercise your muscles pull the weight toward the body during the concentric portion of the movement and then lengthens as the weight moves away from the body during the eccentric portion of the exercise. Pulling exercises use prime movers such as the hamstrings, latissimus dorsi, trapezius and rhomboids, biceps, and forearm muscles. Knowing which muscles are involved in pushing movement and which one generate pulling movement is crucial in order to create a successful push-pull workout routine.

Push-pull training program is a style of training that targets muscles based on whether they involve a pushing or pulling action. These workouts are popular among bodybuilders and other athletes because they optimize recovery time between workouts and help create a balanced physique. Basically this means for every exercise that involves pushing something away from you (bench press, triceps press, etc), you should perform an equal amount of pulling exercises (rows, lat pull-downs, chin-ups, etc.).