You need your muscles for almost everything you do. So it’s not surprising that you have hundreds of them. There are about 700 named skeletal muscles in the human body, including roughly 400 that no one cares about except specialists. On the other hand, there is just one important cardiac muscle. And there are literally countless smooth muscles. All these muscles make up your muscular system. The muscular system works with other body systems to keep you alive and healthy. It helps you do all the things you do. Together with the skeletal system, it forms the musculoskeletal system, which is responsible for movement of the human body.

Being educated in human anatomy is a critical part of becoming a successful bodybuilder.

The human body consists of various tissues, including the skin, connective tissues, organs, nervous system, body fluids, bones, and muscles. Muscles are soft tissues made up of muscle cells that have the ability to contract and extend. Muscles produce force and the movement of our body.

The muscular system is made up of three different kinds of muscles: skeletal muscles, smooth muscle, and heart muscle. But what does each kind of muscle do? And where in the body are they located? Explore the muscular system in this engaging and informative post.

What are the three types of muscles of a human body?

The muscles involved in strength training fall into the category of skeletal muscle. You can make them move just by thinking.

We have three types of muscles: cardiac muscle, smooth muscles, and skeletal muscles.

You can control some muscles – mainly skeletal muscles. The muscles involved in weightlifting fall into the category of skeletal muscle. You can make them move just by thinking. Suppose you want to pick an apple. You reach out and curl your fingers around the apple. You pull it down. Only you decide you want to do this. And your muscles make it happen. Walking around, lifting weights, sitting down, jumping, running, … the list could go on for a long time.

There are other muscles that you cannot control, no matter how hard you try. You can’t make food travel to your stomach more quickly. You can’t make your heart beat more slowly. These kinds of muscles do their work automatically. You would not be alive for long if you did not breathe and if your heart did not keep pumping. You do not even have to think about doing those things thanks to your involuntary muscles (cardiac muscle and smooth muscles).

Most important skeletal muscles of your body

The muscles of your body which you can work out can broadly be divided into two categories – upper body and lower body muscles.

If your strength training program doesn’t include these eight upper body muscle groups, you’re missing out on major gains. 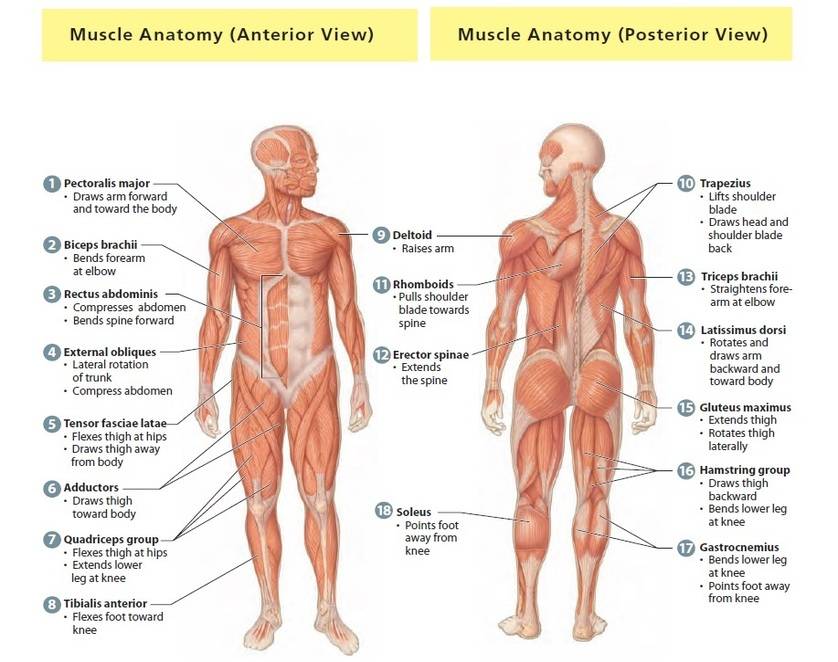 If your strength training program doesn’t include these four lower body muscle groups, you’re missing out on major gains.

What are the main functions of the muscular system?

The main functions of the muscular system are as follows:

Muscles make up about 45 per cent of the average person’s weight. They are 80 per cent water; the rest is mostly protein. Each muscle is made up of cylindrical fibres (sometimes called muscle cells), which are about 50–100 micrometres in diameter (the width of a human hair). They range from a few centimetres in length to 1 m, and can run the entire length of the muscle. These fibres are grouped in bundles called fasciculi, each separately wrapped in a sheath (perimysium) that holds them together. 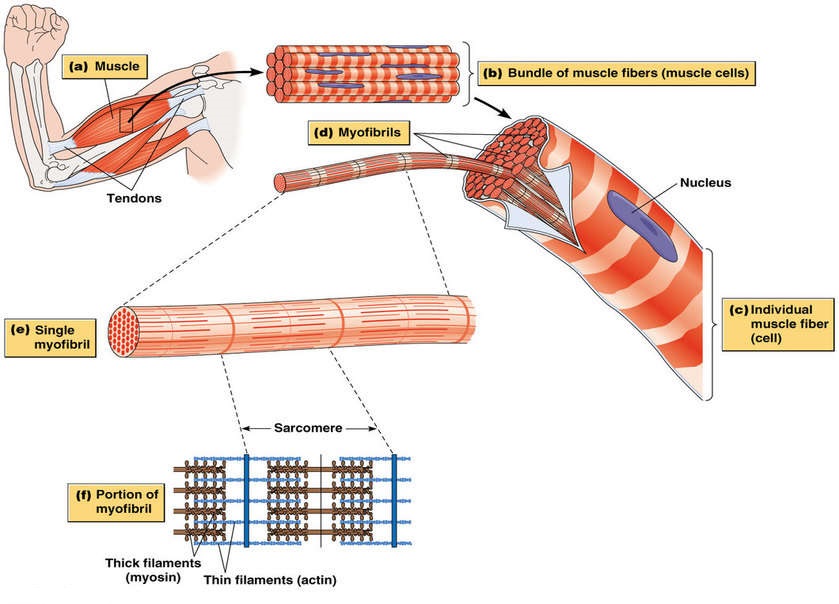 Each muscle fibre comprises thread-like strands called myofibrils, each of which is about 1 micrometre in diameter, or 1⁄100th the diameter of a human hair. These hold myofilaments containing the contractile proteins myosin (thick filaments) and actin (thin filaments), whose actions are responsible for muscle contraction. To a large extent, your muscle’s cross-sectional area, together with the number and length of its fibres, determine its strength. You cannot change the number of fibres in your muscle, but you can increase both its cross-sectional areas through strength training, and the number of muscle fibres recruited when executing any given movement.

How do muscles generate force? How muscles work?

Is there a difference between female and male muscles?

Generally, the muscles of men and women are the same and will perform and respond in a similar manner. However, men can develop more muscle mass than women.

Basic measures of body strength show that females generally have 30–50 per cent less strength than males. This is mainly in the upper body, where men are about 40 per cent stronger. Women typically have less muscle mass and more body fat. Additionally, a man’s taller and wider skeletal frame provides a leverage advantage. However, “female muscle” and “male muscle” are exactly the  same.

There are no inherent gender differences in muscle quality or capacity,  and women can generally generate the same force per unit of muscle as men. Furthermore, with training they make the same relative strength improvements. In certain sports, such as climbing, dance and aspects of gymnastics, the lower centre of gravity, flexibility, strength-to-weight ratio, and shorter levers give a woman a better relative strength ratio.

As we’ve said, muscles and bones and joints form one integrated system, and no one component is more important than another. Without muscles, you would be a motionless pile of bones; without a skeleton, you’d look and move more like a jellyfish; and without joints to control and stabilize the bones, you’d stumble around like the scarecrow from the Wizard of Oz.

To build your muscles, you need to know your muscles. There is no way of getting around the fact that you need to know your muscular system anatomy. Strength training isn’t a mindless jock activity. Athletes, trainers, bodybuilders and even regular gym-goers need to understand exactly how the muscles in their body function. That way they can work them properly to make them stronger and bigger. Each muscle serves a different purpose. Therefore the aim of exercising shouldn’t simply be to make them aesthetically pleasing but to make sure each and every muscle in your body is strong.