When most of us think of the abdominal muscles, we picture the “six-pack” muscles, the rectus abdominis. In fact, there are many more muscle groups to consider besides rectus abdominis muscle. The abdominal wall  is made up of a very complex mesh of muscles that belong to the group known as the core muscles:

In this post you will find out everything you need to know about the functional anatomy of the rectus abdominis muscle – location, shape (appearance), function (muscle action), insertion, origin, and palpation.

Location of the Rectus Abdominis Muscle

The rectus abdominis muscles are paired long strap muscles that extend vertically along the whole length of the anterior abdominal wall. They are broader above and lie close to the midline, separated from each other by the linea alba. It’s named after the straight, vertical direction of its fibers relative to the midline of the body.

The rectus abdominis muscle is strap-like in appearance.

When this muscle is in a good shape and layers of fat disappear from the abdomen, the exposed rectus abdominis muscle creates the look of a “six pack.” 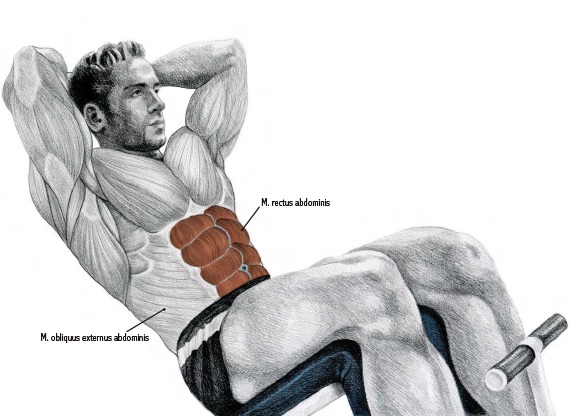 The two rectus abdominis muscles
(one on each side) are encased in a sheath of fascia that forms the central demarcation down the middle of the abs, known as the linea alba. Fascia divisions in the muscles are responsible for the “six-pack” appearance.

Interestingly, there are eight parts of this abdominal muscle (known as the rectus abdominis), but since most people never get that lean and a six pack is well known, the term eight pack never made it except to describe a pack of batteries or hot dog buns.

The rectus abdominis muscle arises from two heads, from the front of the symphysis pubis and from the pubis crest. It inserts into the fifth, sixth, and seventh costal cartilages and the xiphoid process. 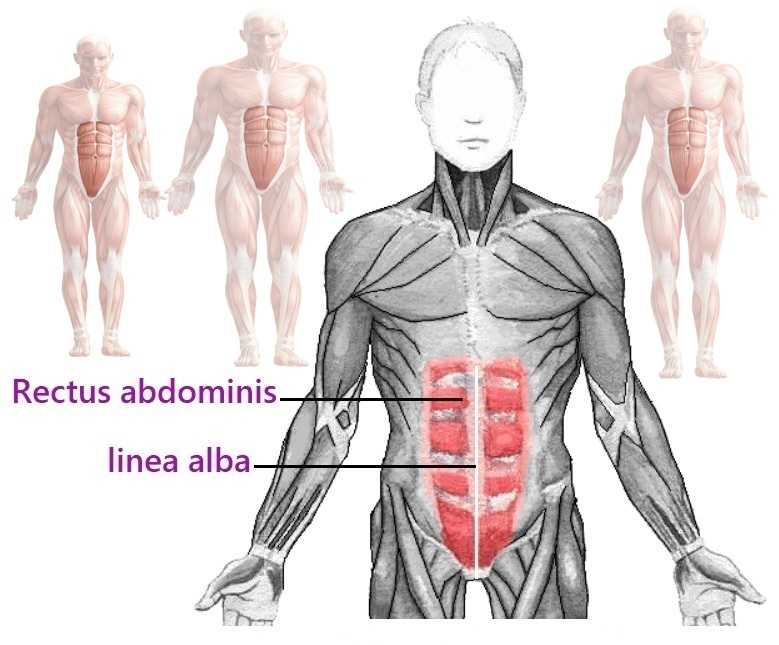 The rectus abdominis muscle is literally, divided into sections by a vertical tendinous inscription called the linea alba, and by horizontal tendinous inscriptions. These inscriptions are very apparent in the abdominal area of a person who is sufficiently lean, and often appear to divide the musculature into a resemblance that is commonly referred to as “6-packs,” „speed bumps” or “wash-board abs.” The process of attaining this look is commonly called getting “cut,” “sliced” or “ripped.”

It should be noted that the depth and width of the tendinous inscriptions are genetically determined. No amount of “specialized” ab training or performing endless repetitions can deepen or increase their width. This predetermined genetic factor — width and depth of the tendinous descriptions — explains why some people who are very lean do not exhibit marked “separation” between the abdominal sections, and never will. How do you get washboard abs? Lose subcutaneous body fat by expending more calories than you take in, hope the fat is used from the abdominal area, and choose your parents well.

Function of the Rectus Abdominis Muscle

The rectus abdominis not only looks good and attractive, but it also serves a real purpose.

The abdominal muscles are the main muscles involved in flexing the torso, but no amount of training will significantly reduce fat in this area, as is sometimes claimed.

Well-defined abdominals are the product of hard training, careful eating and low body-fat levels. If you are after a rippling six-pack, you need to reduce your abdominal fat layer for the muscles to show through. Increasing their size alone through exercise will not be enough. For these muscles to become visible, men need to have 10–12 per cent body fat and women need to have 15–18 per cent body fat. 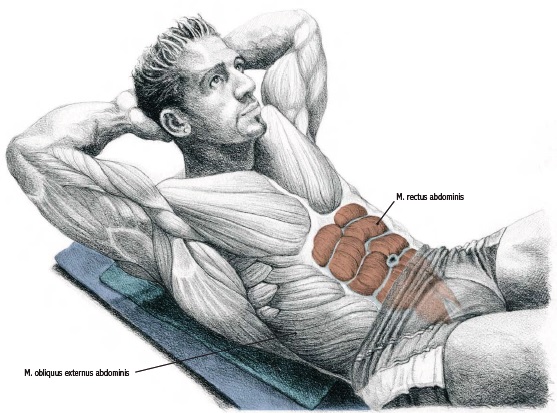 The upper, middle and lower sections of the rectus abdominis do not turn on and off like a light switch. Envision their activation more like the effect a dimmer switch would have on a light bulb. Depending on the movement, body position and load, different regions of the rectus abdominis will shine (activate) more or less brightly. Low level illumination (muscle activation) is always present in the entire muscle (the light bulb).

The rectus abdominis is your potential six-pack and the muscle most people are thinking of when they talk about abs. However, your abs are made up of three sets of muscles. As well as the rectus abdominis there are the obliques in your side (external obliqus and internal obliques), which come into play when twisting and bending, and the transversus abdominis, which goes all the way across your stomach, behind the rectus abdominis. Therefore, for maximum toning you need to work all three muscles individually and together rather than just focusing on the easily worked and dominant rectus abdominis. Finally, the good news is that there are plenty of exercises you can do without even needing to go to the gym. Some bodybuilders show eight distinct blocks of abdominal muscles (four complete rows) while others are lucky to get four blocks to peak out (two rows).