Dumbbell shrug represents a highly specific exercise that uses limited motion to your trapezius, which lies at the back of your neck. A strong trapezius will help protect your neck and spine – making it useful for all contact sports. The shoulder shrug is definitely the most popular and easy to execute trapezius exercise. This trapezius exercise (upper back exercise) is also very simple and suitable for all levels. Beginners will notice rapid progress in the amount of weight they can lift.

It’s long been an issue of whether to train the traps (which is big upper back muscle) with the back or with the shoulders, since both recruit the traps to a point. You could try both ways. We think it’s good idea to train them after training deltoids.

How To Do Dumbbell Shrugs? 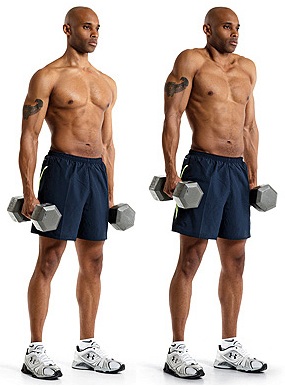 STARTING POSITION: Stand upright with the dumbbells hanging by your sides. Your palms should face your body. Stand with your legs shoulder-width apart and your knees slightly bent. Keep your abs tight and your chest up. Keep your head straight or just slightly forward, with your chin tucked.

EXECUTION (ACTION): Holding the dumbbells in an overhand grip, with your thumbs wrapped around each bar, shrug the weights upwards by drawing your shoulders vertically up toward your ears (shrug your shoulders upward as high as possible). Hold the weights up for 1-2 seconds at the highest point before lowering them to the start position under control, following the same line of movement in which they are raised. The higher the weight is raised, the harder the trapezius works. The farther the dumbbells are lowered, the greater the stretch at bottom. 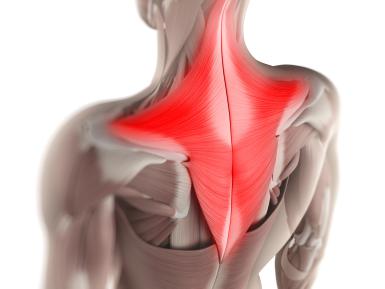 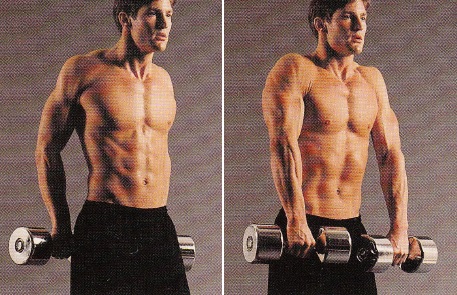 The most common substitution is barbell shrug. You can perform the shrug with a barbell held in an overhand grip across the front of your thighs or behind your butt. The movement pathway is vertical, as with the dumbbell variant.

To add variety to your trapezius workout, replace the dumbbell shrug with a different exercise that works the same muscles (trapezius, levator scapulae). Use the barbell, cables, or even a gym machine to perform the shrugging motion without the dumbbells.

Dumbbell shrug is one the best exercise to develop your trapezius muscles. Shrugs build the trapezius muscles in the space between your neck and shoulder. The traps also pass down behind your neck, forming the central portion of your upper back.

Dumbbells provide more variety in hand positioning (see dumbbell shrug variations) so you can easily change the angle of attack on the trapezius muscles. Dumbbell shrug strengthens your trapezius, levator scapulae (beneath the trapezius), and rhomboid (upper back) muscles. To ensure you don’t use your legs to help get the weight up, perform dumbbell shrugs while seated on a bench or seat.