The slightly less well known cousin of the standing cable fly (cable crossover) performed using high pulleys, the low-pulley cable fly similarly targets the chest but through a different plane of motion as the line of resistance if from the ground.

Setting the pulleys in the highest position focuses on the lower pecs, while the lowest position will work your upper (and inner) parts of the chest which actually tend to be the sections most difficult for bodybuilders to develop.  Placing the pulleys at shoulder height—with arms parallel to the floor—will target your middle pec fibers.

Because you’re working at only one joint — the shoulder — and keeping your elbows locked in a slightly bent position, it makes for an excellent isolation move as a flushing exercise at the end of your workout. Occasionally it can be done first as a pre-exhaust move.

How to Perform Low-Pulley Cable Fly?

STARTING POSITION: Attach single-handle D-grip handles to the lower pulleys on a cable crossover apparatus. Select the resistance to be used. Stand in the direct center of the apparatus with one foot in front of the other and your knees slightly bent. Grasp the handles with your palms facing up, and keep your elbows slightly bent and pointing down toward the floor and behind you. Maintain the arch in your low back and keep your chest up. 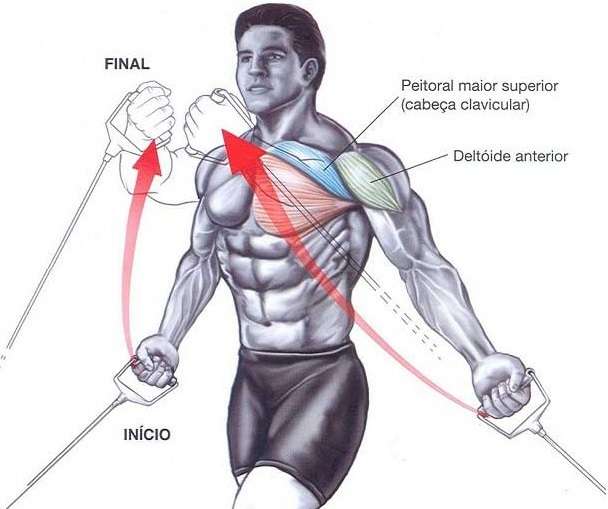 EXECUTION (ACTION): In a simultaneous upward and inward motion, bring the handles to a point straight out in front of you so that your hands are level with your chin (until the handles meet at head height). Pause a moment and squeeze your pec muscles before slowly allowing the handles to return to the starting position.

All of these exercises will place the workload on the upper pecs to help fill out and build muscle in the top of the chest. In addition to your chest, it also helps to strengthen and tone the shoulder muscles.

In this upper chest exercise your body is not supported by a bench, so the stabilizing muscles of your core and legs have to work to keep you in position. Using the cable machine also works your muscles over a large range of motion. It is very useful to perform the cable crossover exercise at varying heights by setting the pulley to a low position (low-pulley cable fly) or even to waist height. These different initial positions allow you to work your chest muscles from slightly different angles. The low-pulley cable fly provides a good stretch for the pectoralis muscles and unlike with the bench press, the triceps muscles are not involved, which means they will not tire before the pectoralis muscles do.