Of the three types of muscle—smooth, cardiac, and skeletal—it is the third type that attaches to bones, causing them to rotate around joints. It is this combined functioning of muscles, skeletal bones, and joints that allows us to run, lift weights, run on a treadmill, jump, participate in a cycling class, and lift and throw things.

When studying the anatomy of the muscular system, one of the first things that we learned about muscles are their points of origin and insertion. The main question is what does this really mean? Well, in this short but informative article, we’ll try to explain what the terms origin and insertion really mean.

Points of attachment: origin and insertion

First you need to remember that the muscles have two main parts: the large muscle belly, and the end regions, which are called the points of attachment or simply the origins and insertions. 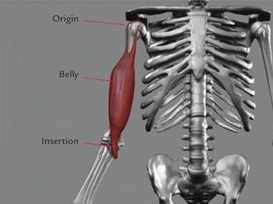 Figure 1: The parts of a muscle: muscle belly and points of attachment

Most muscles pass across a joint and are attached to both bones that form the joint. When a muscle contracts, one of the attached bones remains stationary while the other moves along with the contraction. For convenience we say that the muscle section attached to the stationary bone is called the origin, and the point of muscle attachment on the moving bone is called the insertion. Keep in mind that origin and insertion are relative terms, and can be reversed depending on the action involved.

In case you are wondering why both bones do not move because both are pulled on by the contracting muscle, one of them is normally stabilized by isometric contractions of other muscles or by certain features of its own that make it less mobile.

Here is one example for easier understanding. The pectoralis muscle origi­nates on the sternum and inserts on the humerus or upper arm bone. The head that attaches to the arm has the most range of motion, so it is the insertion. The shape of a muscle may change as it moves, but the origin and insertion never change; they are attached to the skeleton. 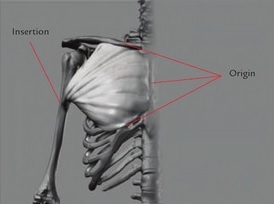 So by knowing these points you understand how to place the muscle in any pose. You also know what direction the muscle pulls in and what its function is. If you know the start and end points of a muscle, deciphering its function is rather simple. Just remember that muscles pull toward the origin, and you will quickly realize the purpose of the muscle in question. Combine this with useful clues contained in the muscle name, and you have a wealth of information about the form in question. 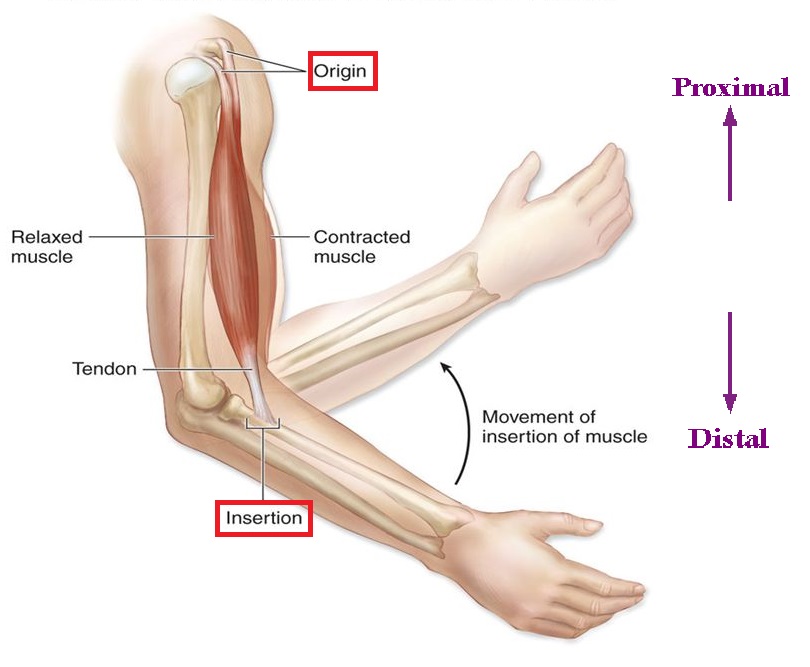 Biceps brachii is a double-headed muscle, meaning that it has two points of origin or “heads” in the shoulder area. Both heads converge into one muscle, sometimes referred to as the “belly”, that runs the length of the humerus. The short head of each biceps brachii originates at the top of the scapula (at the coracoid process). The long head originates just above the shoulder joint (at the supraglenoid tubercle). Both heads are joined at the elbow (insertion: radial tuberosity).

The importance of understanding muscle attachments

The terms origin and insertion provide us with useful points of reference. Many muscles have multiple points of origin or inser­tion. Understanding the functional relationship of these attach­ment points during muscle contraction helps in deducing muscle actions.

The attachment points of the biceps brachii shown in Figure 3 help provide functional information. Distal insertion on the radius in the lower part of the arm causes flexion to occur at the elbow when contraction occurs. It should be realized, how­ever, that origin and insertion are points that may change under certain circumstances. For example, not only can you grasp an object above your head and pull it down, but you can also pull yourself up to the object. Although origin and insertion are con­venient terms, they do not always provide the necessary informa­tion to understand the full functional potential of muscle action.

The largest muscle of the chest is the pectoralis major, which attaches to the collarbone (clavicle) and sternum, and inserts into the upper arm bone (humerus).

Gluteus maximus is the largest, strongest muscle and is largely responsible for the size and shape of the backside. It attaches to the lower vertebrae and top of the rear part of the pelvis, and inserts into the top third of the back of the femur (thigh bone).

Muscles of the back are among some of the largest in the human body, and the latissimus doris muscle is the largest of these. It originates along the seventh thoracic vertebra (T7) region of the spine and extends to its insertion point on the humerus.

Muscle insertions determine to what degree a specific muscle can be developed. The easiest examples to illustrate this are the biceps and the calves. Your own biceps are either short, average, or long in length. You can figure this out in two seconds by flexing your bicep with the forearm and upper arm at a right angle. How much space is there in between the end of your biceps and your elbow? If there’s a lot of room there, your biceps are short. In case there’s about an inch of space, consider your muscle length average. On the other hand, if there’s no room at all and your biceps muscle is jammed right up against the elbow joint and in that case you have long biceps.

If a muscle is attached lower on the bone, that muscle will look longer when fully developed and will create a more pleasing appearance.

Having long muscles means that you have more muscle cells to work with and increase the size of.

The calves are the same way, with the two extremes being high and low calves. Flex your calf and see where the muscle ends on its way to your ankle. If it stops not too far down from your knee,  you are unfortunately stuck with high calves. You can beat the crap out of them but they will always be a weak point on your body. If they go way down you are in luck. In fact, you probably have nice calves without even training them.

Every muscle on your body inserts wherever it has been programmed to end up by your particular DNA. All this nonsense about preacher curls being able to “fill in” short biceps is nothing but wishful thinking.

Putting it together: Points of origin and insertion

When talking about muscles we will often refer to origins and insertions, as shown in Figure 1.

Most skeletal muscles are attached to two bones across a joint so the muscle is able to move parts of these bones closer together. The origin and insertion refer to the anatomic locations of where a muscle attaches (usually a bone). The origin refers to the proximal attachment site that remains relatively fixed during contraction. The insertion refers to the muscle’s distal attachment site to a moveable bone.