Ever hear your training instructor say,“Pull the bar in front of your head, below your chin almost to your collar bone?” And you think: I have no idea what they are even talking about! It’s because your are not familiar with some of the major bones of the skeletal system.

When trying to sculpt your body, you really need to know a little about your anatomy. This is why knowing your anatomy really matters. After reading this post you’ll be able to identify all major bones of the human skeleton. 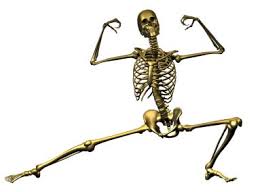 The typical adult human skeleton usually consists of 206 named hones. Depending upon the age of the individual, the exact number of bones ranges from 206 to 350. Newborn babies, for example, have over 270 bones, some of which fuse together.

For descriptive purposes, the skeleton is divided into the axial and appendicular skeletal systems.

The skull, vertebral or spinal column  (also known as the backbone or spine), breastbone (or sternum), and ribs are a major division of the skeleton; together these bones form the vertical axis of the body (the axial skeleton). The appendicular skeleton includes the bones of the upper and lower limbs (extremities). The clavicle, scapula and pelvis also belong to the appendicular skeleton. It is a common error to link
them to the axial skeleton.

In the human, the axial skeleton consists of the 80 bones while the appendicular skel­eton consists of 126 bones. You do not need to know the names of all these bones. However, you do need to be familiar with the major bones of the skeletal system that make up the major joints that we use for movement. You will probably know many of them already.

Major Bones of the Skeletal System

The human body is full of many tiny bones, but there are only 18-20 bones that play a major part in the structure of our skeleton. Here is the list of the major bones of the skeletal system and their exact location.

The bones of your head make up your skull. It carries our brain and also supports out face. Skull also protects the brain from knocks and bumps. The cranium is the top part of the skull. Eight bones fit tightly together to form the cranium. It acts like a helmet around your brain. Here you will also find the smallest bone in the human body (the stirrup in your middle ear). 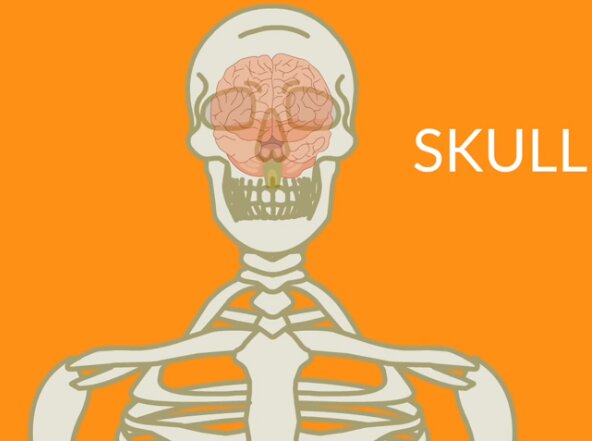 The clavicle or collarbone is a long prominent bone that serves as a strut between the shoulder blade and the sternum or breastbone. As you can see from the image, there are two clavicles – one on the right and one on the left. This is the only long bone in the body that lies horizontally. Clavicle is palpable in all people. In people who have less fat in this region, the location of the bone is clearly visible, as it creates a bulge in the skin. 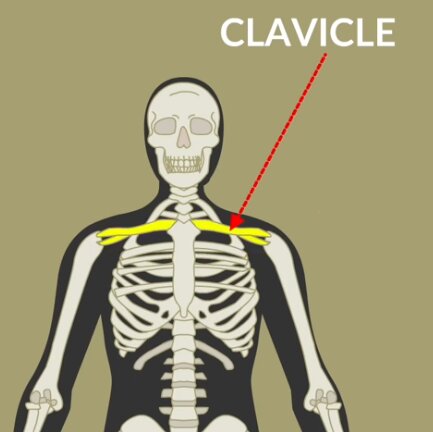 The sternum is a long flat bone shaped like a necktie. It’s located in the center of your chest. The old anatomists who named this bone pictured it as a short sword or knife, with its tip pointing down toward your navel  and its handle just under the hollow at the front throat.

The rib cage is the curved wall of ribs that surrounds and protects our heart and lungs. The ribs are thin, flat, curved bones in your upper body that form a protective “cage” around the heart and lungs. The ribs are comprised of 24 bones arranged in 12 pairs that form a kind of “protective” cage that encloses the upper body and gives the chest its familiar shape. The sternum (or breastbone) is also a part of the rib cage. 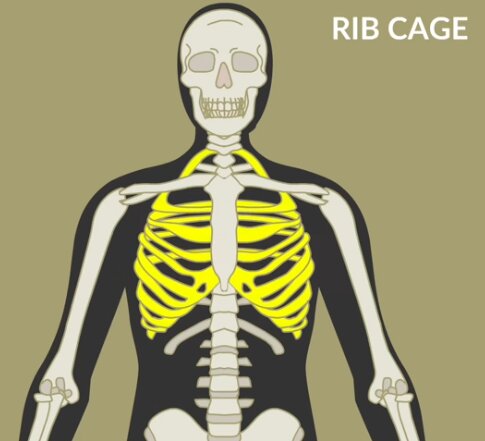 The humerus is the longest tubular bone of the upper arm (limb), extending from the shoulder to the elbow. 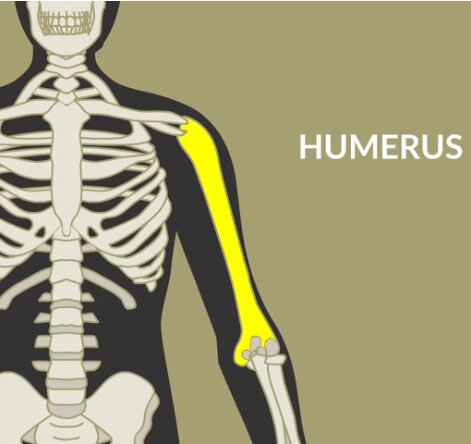 There are two more long bones in our hands – radius and ulna. They form the lower arm or forearm, extending from the elbow to the wrist and articulating with each other at their top and bottom ends. When the hand is in its ‘palms up’ or supine position, these two bones are parallel. The radius is on the thumb side; the ulna is on the little finger side. As the hand is turned into the ‘palms down’ or prone position, the lower end of the radius rotates about the axis of the ulna and the shafts of the two bones cross. 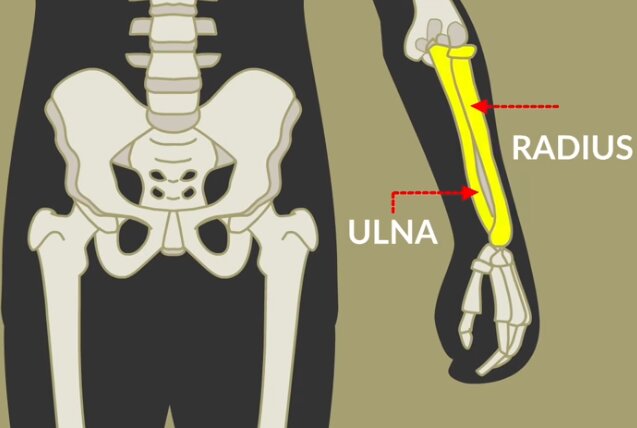 Each hand consists of 27 bones, divided between the wrist bones (carpals), the palm bones (metacarpals), and the finger bones (phalanges). 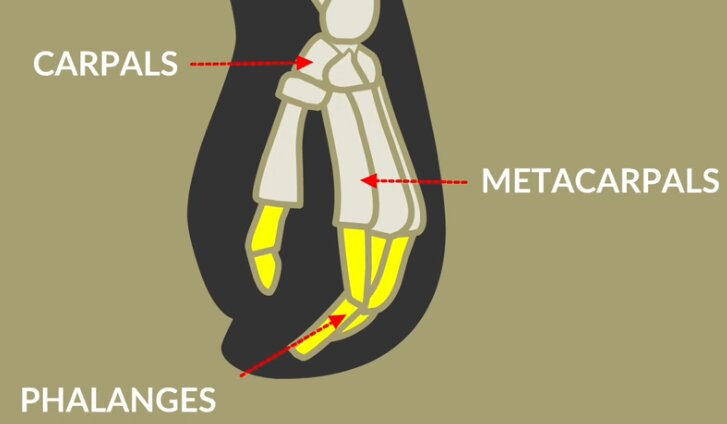 Backbone or spine or vertebral column

This bone is built of 33 small bones called vertebrates (singular: vertebra) and this whole structure is known as the spine. As you can see, your spine runs down the length of your back from the base of your neck  to your pelvis. The spine helps you twist and bend, and holds your body upright. Also, it protects your spinal cord, which is made up of nerves carrying vital messages to and from the brain. 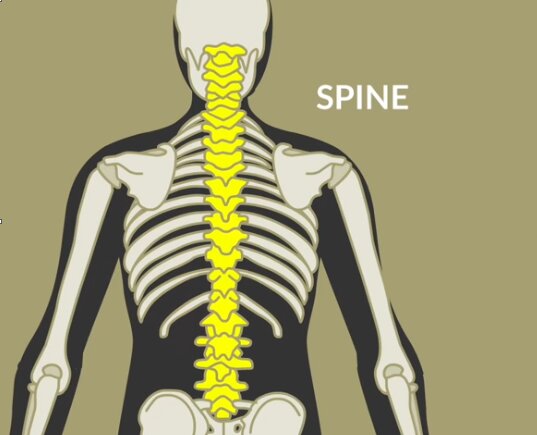 It transmits the upper body weight to the lower limbs while supporting the visceral organs of the pelvis. The pelvic bones are fused to help strengthen the pelvic girdle. This provides more protec­tion for the pelvic organs – the bladder and uterus. Because the pelvic girdle is secured to the axial skeleton by strong ligaments, movement at the hip joints is not as great as at the shoulder joint. 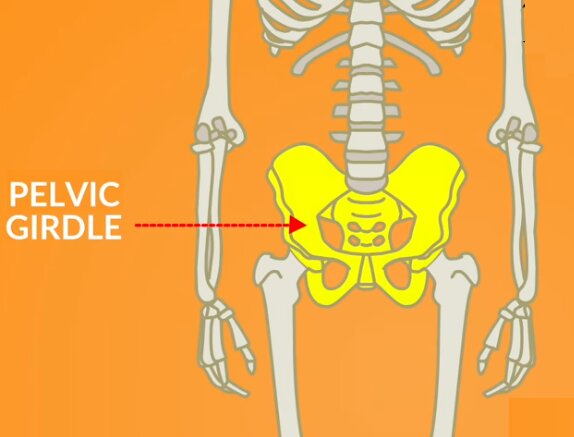 The femur (thighbone) meets the pelvic girdle at the hip socket. Going down the leg, the femur connects to the knee bone, then to the shin bones (tibia and fibula) and then to to the bones of ankle and foot. 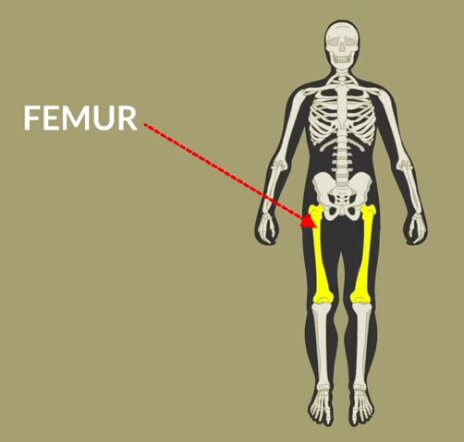 The tibia and the fibula are the medial and lateral bones of the lower leg. The tibia is the stronger of the two and, except for the femur, is the longest bone of the skeleton. 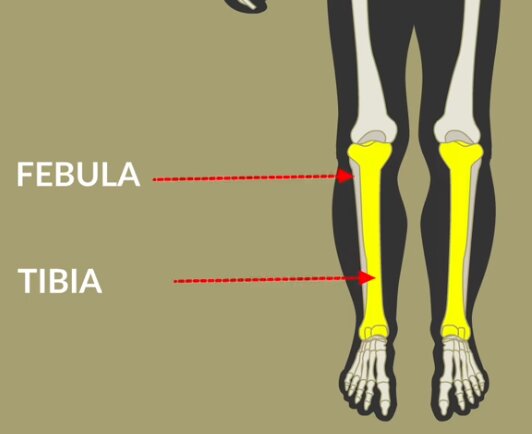 The foot contains 26 bones that are divided into three regions: the tarsals (or ankle and heel), the metatarsals (forming the sole of the foot), and the phalanges (forming the digits). 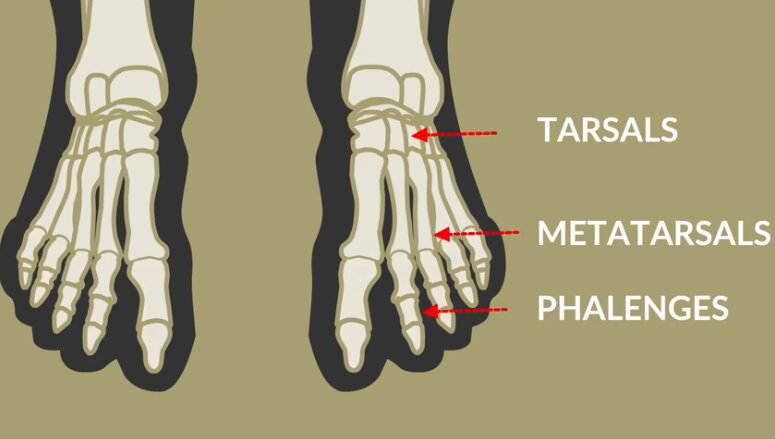